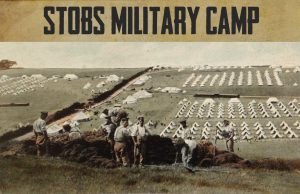 The Stobs Camp Project is delighted to announce the launch of a new heritage trail that will guide visitors around the camp and let them explore what it was like to be at Stobs during the First World War.

Developed in partnership with CMC Associates and created with Stobs Camp Project volunteers the heritage trail visits some of the key areas of the camp including the barrack hut, drying shed and former cemetery. The trail includes images of the camp during the First World War when thousands of German civilians and military prisoners were interned there.

People will also be able to listen to Reene Currie on what it was like at Stobs in the Second World War. Interviewed in 2016 Reene remembered how as a young girl she had pulled a metal rod and let all the water out of a bathing pond. “I was in a dreadful panic!” she said.

The free heritage trail will be available from 4th August 2018, 104 years since Britain declared war on Germany. It is available as an App for mobile devices and tablets and is also available via the internet on the izi.travel website.

On the heritage trail’s international reach Dianne Swift, Stobs Camp Project Manager, said “Not only will people visiting Stobs be able to learn about the camp but people all around the world will be able to follow a virtual trail. This means descendants of prisoners or guards can access it from whichever country they live in as well as supporters of the project who live as far away as Australia.”

Local volunteers from the Scottish Borders have helped produce the content and have added their voices to the narration. Local paramedic, Ian Lowes, said “I have never done anything like voiceover recording before – another great experience of being involved in the project.”

Andrew Jepson, Stobs Camp Project Officer, said he was delighted with the results. “I am really proud of the new heritage trail and how it provides an interactive insight on what Stobs Camp was like over one hundred years ago. I hope people enjoy exploring the camp and feel inspired to learn even more.” Full details of the heritage trail and how to access it are now available on the Stobs Camp Project website at www.stobscamp.org.